VISIT THE VILLAGE OF PALENQUE 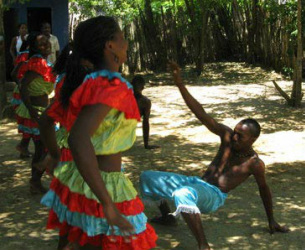 Founded by escaped slaves during the 17th Century, this tiny village was heritage listed by UNESCO in 2005 due to its strong African linguistic, musical and cultural traditions. It is considered the first free town in the Americas and is definitely worth a visit in order to gain a fuller picture of Cartagena, the history of slavery in Colombia and Latin America and to observe a community where Afro-roots and traditions have been preserved and maintained including a distinct creole language (Palenquero), folkloric dance, cuisine, dress, hairstyles, political organisation and social structure.

Escaping after apparently awkwardly knocking up the Governor's wife, leader Benkos Bioho led a group of other fleeing slaves on the long walk from Cartagena to establish this palenque (walled town) at the foothills of Montes de María. In the following century many palenques were established throughout Latin America, as escaping and freed slaves sought refuge and a place to live in the same manner as they and their ancestors lived in Africa. Now, the Palenque de San Basilio is the only surviving palenque and continues to be home to about 3,500 residents who are direct descendants from those original African slaves. The town's most active ambassadors are the colourfully frocked Palenqueras who trudge the calles of Cartagena and the beaches of Bocagrande with giant silver bowls on their heads selling tropical fruits and traditional sweets (try the enyucado! Delicious!) and earning money to support themselves and the community.

Located about one and a half hours south of Cartagena, the best way to see Palenque is by taking a tour with a local guide who will grant you access to the people and places of this close-knit community in a way that just isn't possible on your own. Sundays are the most common day, but we can be flexible. Reservations are essential so send an email enquiry now and we'll tee everything up!

Palenque Tour
The Palenque tour needs a minimum of 2 people because we need to hire a car to take us there (transport is the most expensive element of the tour). We usually keep groups small, and because Palenque isn't super high on everyone's agenda, it will be most likely that it will just be you and whoever else you are booking for joining on your particular day, but if others book for the same day we reserve the right to combine bookings.

The general structure of your day is as follows:

1. Meet up at your hotel at 9:00am and from there we'll take a private car to Palenque. The ride takes about 1 hour.
2. We will be received in the local Palenquero Language at the main square by a local tour guide.
3. Afterwards, we'll go to the Palenquero Knowledge Center and we'll have a chat about the Palenquero culture and traditions. This is like an introduction to the town.
4. We'll after walk around the town, highlighting and visiting the following: 5. Short stop at the Typical Palenque Products Souvenir Shop - this is a way of further supporting the community, we don't take any commissions and this is 100% an optional stop, so if you prefer to omit it, that's a-ok. Although lookout for the incredible cookbook, that actually won best cookbook in the WORLD.
6. Enjoy traditional lunch cooked on wood - a true foodie highlight.

If we do all the activities, the tour would last about 5 hours, including transportation time.

Price is $110 USD per person. If you prefer to pay in pesos, the price is 300.000 pesos per person. Includes transportation, lunch, local palenquero guide and an awesome Cartagena Connections llave  as a translator and trip leader. If you speak Spanish, let us know and we can arrange for you to go without an English translator which will mean a reduced price.

What to know:
Palenque is HOT and there is very little breeze. We suggest you dress accordingly and bring more water than you think.  You might want to bring some extra money to support the community by using the services.. get your hair braided, buy some homemade traditional sweets, buy a CD, buy the cookbook etc
The guide and Cartagena Connections will put zero pressure on you to buy anything at all.. just FYI
Copyright 2013 | Cartagena Connections | Manga, Calle 26 #15-45, Edificio Espinosa, Cartagena de Indias | info@cartagenaconnections.com